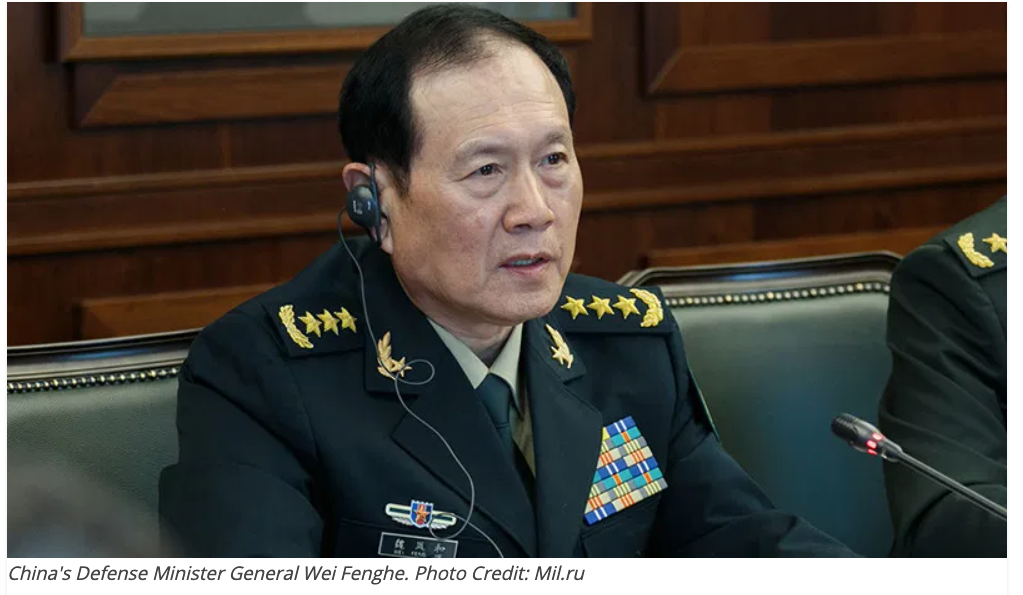 The visit of the Chinese Defense Minister Wei Fenghe to Sri Lanka which begins on Tuesday, is significant as it indicates that Sino-Lankan relations may go beyond economic engagement to acquiring a military dimension.

It is reported in a local Sunday paper that Wei’s visit will result in China’s giving Sri Lanka equipment to modernize the army, navy and air force and enhancing the training component. Though independent confirmation of this has not been possible, what is clear is that China is looking beyond infrastructure development projects in Sri Lanka. It views the island nation as a strategic asset in the military sense also.

China has been a supplier of military hardware to Sri Lanka during the long drawn out war against Tamil separatists when other countries refused to supply arms on humanitarian grounds or because they were partial to the Tamil movement. China did not have any such considerations. After the war ended in 2009, training of Lankan troops and the supply of new hardware continued, albeit on a limited scale. The focus had shifted to infrastructure development in a big way. China built highways, a container terminal, a whole new port and a new airport with amazing speed.

Earlier in April, Sri Lanka inked an agreement with the state-run China Development Bank for a loan of US$ 500 million. A month or so earlier it signed a currency swap deal worth US$ 1.5 billion with China to ensure fiscal stability in the face of the unceasing pandemic. “The USD 500 million loan was a part of the USD 1 billion loan (signed before), out of which USD 500 million was released last year,” the Sri Lankan embassy in China explained. A Sunday paper added that another US$ 700 is being sought.

Apparently under pressure from the Chinese President, Xi Jinping, who spoke to his Sri Lankan counterpart Gotabaya Rajapaksa, the Lankan government tried to speed up implementation of the languishing US$ 1.4 billon Chinese added Colombo Port City project. A hurriedly drafted Port City Commission Bill was submitted to parliament. But the Bill was immediately taken to the Supreme Court by 19 litigants who alleged that the Bill bristled with unconstitutionalities. The most embarrassing allegation was that the Lankan government is creating a “Chinese colony in Sri Lanka” through the Colombo Port City Commission Bill. The Court’s verdict is awaited.

It is in this situation that the Chinese Defense Minister Gen.Wei Fenghe has come to Sri Lanka for a three-day stay which ends on April 29. Chinese sources described the visit as a routine one undertaken as part of a trip to other countries. On the face of it, this could very weIl be just that, but there is more to it than meets the eye.

Wei’s sojourn in Vietnam, just prior to his arrival in Colombo, may provide a clue to what might emerge from his trip to Sri Lanka. On Monday, Wei met the General Secretary of the Communist Party of Vietnam Central Committee Nguyen Phu Trong and the Vietnamese President Nguyen Xuan Phuc. On the Sino-Vietnamese conflict in the South China Sea, Trong was soft, saying that the two countries should properly handle the issue based on mutual trust and respect, and prevent any related negative effect on bilateral relations. President Phuc said that Vietnam firmly upholds the One-China principle and opposes any forces’ interference in China’s internal affairs.

” Vietnam will stay on guard against and firmly resist any schemes to undermine the Vietnam-China relations, and will never follow other countries in opposing China,” Phuc noted.

Both countries spoke about enhancing military cooperation. But no details were given.

Likewise in Sri Lanka too, military cooperation is likely to be discussed. In his phone conversation with President Gotabaya Rakapaksa on March 29, President Xi Jinping had said that “China attaches great importance to the development of bilateral ties, and stands ready to work with Sri Lanka to determine the strategic direction and achieve steady growth of the relationship.”

There was no mention of military cooperation in Xi’s remarks, but the use of the term “strategic direction” is noteworthy in the context of the US and Indian interest in recruiting Sri Lanka as a partner in their ventures to safeguard their maritime security interests against alleged Chinese expansionism in the Indian Ocean Region. Sri Lanka is already a part of the India-inspired Indian Ocean Maritime Domain Awareness Structure. The Secretariat for this is located in Colombo.

However, China has a long way to go before it can claim to have achieved a credible presence in Sri Lanka and the Indian Ocean Region (IOR). Its naval reach is still short of the requirement in the IOR, which is still dominated by the US and India. But at the same time, China has a pressing need to safeguard its ships plying on the East-West route which lies just south of Sri Lanka. Its efforts to get a foothold in Sri Lanka will thus continue.

But progress in this sphere will necessarily be incremental as alarm bells will started ringing in India the moment Colombo talks of military cooperation with China. India, which considers Sri Lanka as being within its legitimate strategic ambit, got alarmed in 2014 when President Xi Jinping’s visit to Colombo almost coincided with the secret visit of a Chinese submarine to Colombo port.

The US-based Sri Lankan expert, Nilanthi Samaranayake argues in a special report for the United States Institute of Peace, that South Asian leaders are well aware of the Indian military’s operational reach into their countries—whether invited or uninvited. As a result of their fundamentally asymmetric relationship with India, South Asian countries do not have the political will or capability to meaningfully cross this rising power. This includes providing military basing access to China, Samaranayake said.

More recently, India objected to the Lankan government’s giving a Chinese company the contract to build three small power plants on some islands in North Lanka located very near Indian shores across the Palk Strait. The Lankan government had to keep that project in abeyance.