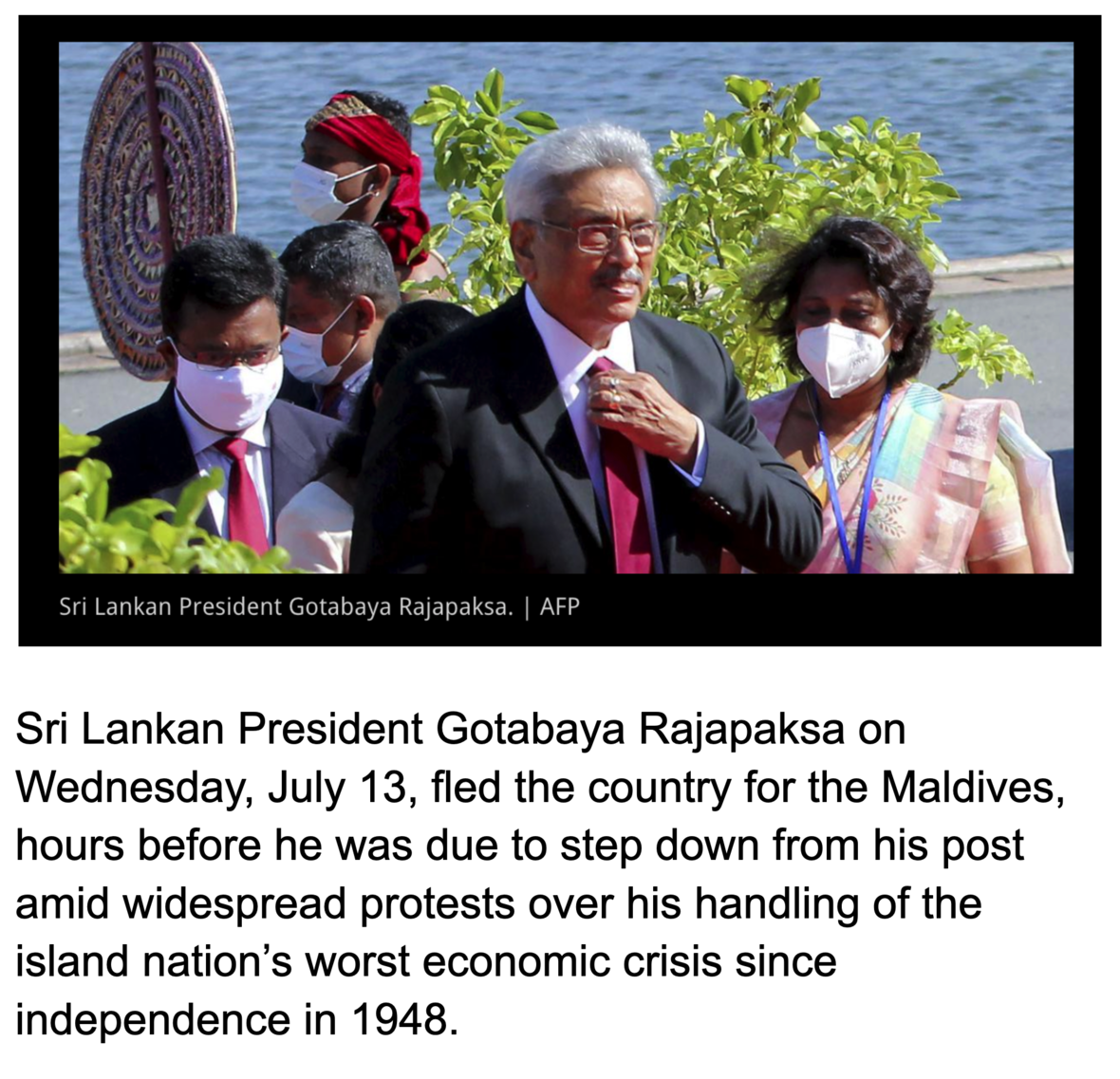 A spokesman for Tamils for Biden, a U.S.-based Tamil diaspora group, said that “After waging an ethnic war against Tamils for more than 30 years, Sri Lanka bankrupted its country to the amount of $52 billion U.S. dollars.”

“The war expenditure was the main culprit in ruining the Sri Lankan economy.

‘”Another reason for the severe economic crisis in Sri Lanka was a failure to focus on economic development. Their preoccupation was instead on the continuous genocide of the Tamil people. Sri Lanka mercilessly oppressed the Tamils, annexing Tamil lands into Sinhalese districts so that it would be easier to ethnically cleanse those areas without Tamil interference.

“The third reason for bankruptcy is the heavy corruption by not only the presidents, but by the ministers, especially the defense minister and defense secretary, and MPs.”

Tamils for Biden have offered a solution to the chaotic, desperate situation of Gotta Rajapaksa, who, after being forced out of Sri Lankan by “Go Home Gotta protestors” in Colombo, traveled first to Maldives, then to Singapore, and finally to Thailand.

The former president was compelled to leave the Maldives and Singapore, according to the media, because of severe pressure from UNHRC and international human rights groups, as well as a signature campaign by the Tamil Diaspora.

The spokesman to Tamils for Biden confirmed that the current president and cabinet members are supported by the Gotta’s party (Pera Muna). The current cabinet is a duplication of his cabinet except for two ministers. Rajapaksa still effectively has control of the presidency and cabinet.

If Gotta accepts his crimes against humanity and uses his remaining influence with the government and 67 percent of the Sri Lankan population who are Sinhala Buddhists to help bring about Tamil sovereignty, the Tamil diaspora community is willing to make a deal.

However, he first needs to acknowledge that he and his government during the war propagated lies about the Tamils, the alleged attacks on civilians and reports of child soldiers. Then Tamils for Biden would agree look into providing possible relief to former President Rajapaksa and his family members, plus economic support to Sri Lanka as well as assistance with the International Criminal Court.

Both Gotta and Mahinda Rajapaksa should deliver a message of apology to the Tamils and do their part to persuade Buddhist and Sinhala leaders to accept Tamil sovereignty. Within a few days of this message, Sri Lanka should then amicably let the Tamils separate from United Sri Lanka to form a Tamil sovereign nation, Tamil Eelam.

If all happens as we propose, Tamils for Biden will open dialogues with the U.S., EU, India, and the rest of the world—particularly Human Rights groups and Tamils who lost their relatives in the war and mothers whose children were abducted by Sri Lankan army—to consider helping Gotta Rajapaksa and his family end his current isolation.

We made a sincere offer to pay the $52 billion foreign debt of Sri Lanka in exchange for Tamil sovereignty.

A spokesman for the Tamils for Biden said of their offer that “This is our second offer to save Sri Lanka to escape from their current crisis. By solving Tamil sovereignty questions that have been holding back Sri Lanka economically for the past 80 years, Sri Lanka will be given a fresh look by the international community and have a chance to truly thrive. It will save Sri Lanka and create a bright future for Sri Lanka with a new sovereign neighboring country of Tamil Eelam.”